As of Noita 1.0, the Twisty Passages has been replaced with the Ancient Laboratory

The Twisty Passages was a cramped cavern area accessible by digging below Snowy Wastelands or traversing the Dark Cave from the Mines.

It contained some of the enemies from the Mines and had puddles of Berserkium, Teleportatium, Pheromone, and Chaotic Polymorphine. It was otherwise empty of both items and wands. Lamps here were a different, larger version that could block player movement, unlike the smaller versions found in the Mines and elsewhere.

Structured to feel like a maze of sorts. The puddles of Teleportatium would either make you more lost or discover other sections of the passages.

The true danger here came from the many puddles of Chaotic Polymorphine which would often cause weak enemies to suddenly turn into much more dangerous creatures like the Jättimato, or the player into a weaker creature. Despite this, it was often worth an early visit in order to bottle some of the valuable magical liquids that spawned there. 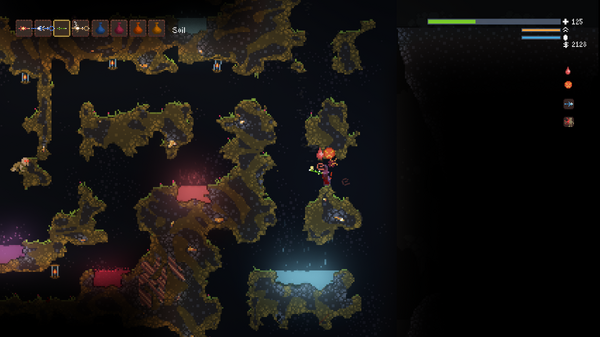 Twisty Passages on the left. Dark Cave on the right.
Retrieved from "https://noita.fandom.com/wiki/Twisty_Passages?oldid=11396"
Category: