This page contains information that may spoil parts of the game for newer players. Tread carefully.

This page contains information that may spoil parts of the game for newer players. Tread carefully.

Three-Eye's Legs (in-game name Kolmisilmän Koipi) is a mini-boss which spawns in the Pyramid biome. It rests on an altar, and will only awaken once the player gets close enough to it. The glyphs adorning the altar translate to YOUR REWARD.

It will periodically spawn smaller skull enemies (usually in pairs) that shoot Toxic Sludge projectiles. It cannot be normally damaged until it opens its outer shell to use its ranged attacks.

Upon death, similar to Dragon, it usually drops a Extra Max Health and a Wand. Defeating it also unlocks a variety of spells (see #Spell Drops below), four of which may also be dropped when it is defeated.

On the altar that it spawns on, there is also a small book.

Three-Eye's Legs is immune to most damage until it reveals its weaker inner reddish tissue for casting projectiles. It cannot be stained normally, so is immune to effects like toxic sludge, and the only way to damage it while it keeps its outer shell closed is to employ Plasma Beam based attacks, which can force it to open its shell.

Once awoken, Three-Eye's Legs will chase the player around the Pyramid, sometimes destroying sections of the brickwork in the cramped corridors. In the more open areas of the Pyramid, it tends to prefer the upper western corners of the rooms. If the Pyramid's ceiling is destroyed, it tends to wander gradually upwards and to the west until it escapes the fight entirely.

Three-Eye's Legs has 4 types of attacks:

If the path to the player is obstructed, it may also quickly move towards the player, destroying materials in its path, sometimes with a meandering path.

When defeated, Kolmisilmän koipi will also drop 4 random spells out of the following pool:

All of the above spells are also unlocked for future runs when it is defeated for the first time. 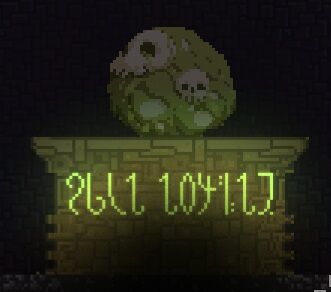 The miniboss resting on its altar, the runes translate to "YOUR REWARD"
Retrieved from "https://noita.fandom.com/wiki/Kolmisilmän_koipi?oldid=19441"
Categories: