A Holy Mountain is a Biome found between each of the main areas of the game, separating the levels. They are always composed of Brickwork, which is very resilient to most digging methods, and their tops are decorated with portals which lead to the central shop area within the biome. The portals are linked to the eye structures beneath them which are normally filled with Teleportatium; if an eye is emptied or enough of another material is introduced, the corresponding portal can be deactivated.

Though there are many portals at the end of each area, they all lead to the same location, as there is only one shop zone per Holy Mountain. Entering a different portal from the same floor will not refresh the pickups or shop inventory. On occasion, the entire basin containing a portal may be submerged in Blood, Water, Toxic Sludge, Oil or Lava.

Each Holy Mountain contains the following:

On the right side is a tunnel leading to the next area. Upon passing through the slanted section of the exit tunnel, the ceiling above the perk altar will collapse and physically block the passage. Red particles will appear which deal significant damage to the player if they try to re-enter the room, though these fade away after a handful of seconds. Trying to enter the Holy Mountain by any means while the curse is active will swiftly result in a death attributed to the "Holy Mountain curse".

Additionally, once the ceiling of a Holy Mountain collapses, it stops granting the ability to edit wands within. 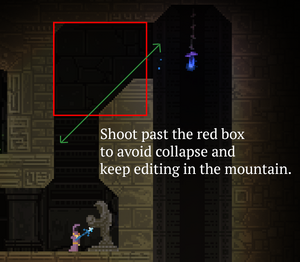 How to teleport past the collapse trigger.

The collapse of the Holy Mountain is only triggered when the player crosses into the upper section of the exit tunnel. It can be avoided by bypassing the trigger, which can be done in any one of a few ways:

Adding a Long Distance Cast spell to a teleport wand makes exiting and entering the Holy Mountain trivial, as you can simply teleport through the dividing wall of the exit tunnel, or directly out from the bottom of one of the ponds. Exactly 3 Long Distance Cast spells and a Teleport Bolt can also be used to teleport directly into the eye above the entrance of the shop area. Utilizing the Teleportatium inside of the eye, this allows traveling upwards to the previous biome.

Using any of these methods, it is possible to leave the Holy Mountain and return later to edit or store spells and wands.

If you choose to use the polymorph method, note that using Unstable or Chaotic Polymorphine can be dangerous, as some of the possible forms can easily kill themselves their own attacks or destroy the temple brick (especially Worm forms), thus unintentionally angering the gods. Be cautious of enemies waiting just below the exit passage, especially when using regular Polymorphine as it leaves you completely defenseless. It is possible to wait at the topmost perch in the exit tunnel until the polymorph expires, but be sure you are not within the trigger zone when the polymorph expires.

Exiting a Holy Mountain without triggering the collapse by using Polymorphine.

Entering a Holy Mountain using Chaotic Polymorphine. Note that you can stand on the very edge of the top platform without triggering the collapse, making it much easier to apply the polymorphine.

The Holy Mountain area is made of brickwork, which is resistant to explosives but can be destroyed by other means such as Acid or Worms. If the walls surrounding the inside area are damaged, the player will receive a message saying You have angered the gods and a hostile Stevari will spawn above the perk altar inside the damaged Holy Mountain. Once the gods are angered, a Stevari will spawn in every future Mountain in the current run. Note that this only occurs if the brickwork around the shop zone is damaged; the player (or Worms) can safely dig into the brickwork on either side of the shop with spells or acid to travel up or down levels if needed without angering the gods.

Once the gods are angered, the only way to stop future Stevari spawning is to pick up the Peace with Gods perk, which will also make any already-spawned Stevari friendly. Alternatively, a few stacks of the More Love perk will cause the spawned Stevari to be passive towards the player.

The glyphs under the Portals read:

The glyphs under the Health and Spell Pickups read:

The glyphs under the Perk altar read: