This page contains major spoilers surrounding the lore of the game.

This page contains major spoilers surrounding the lore of the game.

Scattered throughout the world in Orb Rooms, the story of Noita can be translated and pieced together from a series of glyphs, which can be uncovered by pouring various substances in various orders into the various basins of water found in the aforementioned Orb Rooms.

The glowing red glyphs that are revealed are a Finnish cipher-text.

The story is also told in pictographs, in the starry cutscene presented when a player boots up the game for the very first time.

The orb room glyphs can be translated using this key to map each glyph to a Finnish character. 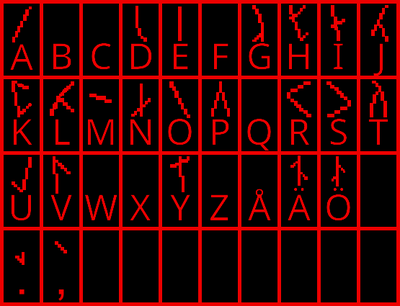 Below is a table containing the original glyphs, the deciphered Finnish, and an English translation.

For more information regarding accessing the glyphs which tell the story above, see this video.

In short, the glyphs tell the story of the creation of Noita's world, and the birth of the gods of Nature, Magic, and Technology. The midsummer's loon (possibly some sort of creator bird) laid three eggs. The first egg fell out of the nest the three eggs were lain in, and cracked. This egg then bled for 7 days and nights, and from this life and death were formed.

The white of the egg flowed out to the west, forming the Snowy Wasteland, along with the earth and the mountains. Next, the yolk of the egg flowed out to the east, creating the Desert and bringing heat and fire to the world. The egg then hatched, and the god of Nature was born. Nature then created the laws of nature, the plants and animals, and 'set' the earth, mountains, rivers, etc. in place. An unknown amount of time passed as the god of Nature worked. The god of Nature is noted as being satisfied with its creations, and that there was harmony in the world.

Finally, the third egg hatched, and the god of Technology was born, who then gave the animals of Nature the ability to use machines and devices. It is unknown whether this upset any of the other gods.

The Loon mentioned in the first glyph, as well as the world and various primordial forces being formed from the cracking or hatching of three eggs, are almost certainly allusions to the Kalevala, in which the world is formed when a Pochard makes a nest on the knee of the sky goddess Ilmatar, who is laying on her back on an endless ocean. Ilmatar shakes her leg, causing three eggs to fall into the ocean and break, forming the world. A similar event forms the world in the folklore on which the Kalevala is based, with some significant differences. Nature has some similar characteristics to Sampsa Pellervoinen, another figure in the Kalevala, who "sows" all vegetation and even the very landscape, though he isn't responsible for the creation of animals. 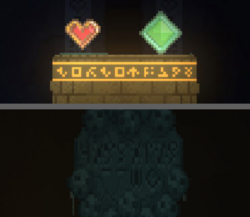 Comparison of glyph styles, showing a Holy Mountain platform and the monument to Bammalam.

A different set of glyphs, which translate directly into English, can be found in other locations. They can be found adorning various altars, on platforms such as under the Pickups and the Perks within the Holy Mountains, and inscribed into various parts of the world.

They can appear as if styled in different ways, depending on how condensed the font is. Short and compact glyphs appear on platforms and altars, and taller more script-like forms can appear in places such as the Giant Tree's monument to Bammalam.

Glyph translation key by Mills from the Noita Discord

Infographic map showing the approximate locations of all the secret messages.

There are also a myriad of hidden messages, often buried deep underneath the ground and entirely hidden until areas have been excavated. These are organised based on the depth at which they can be found in the world.

Along with the Orb Rooms, there are several other locations of note within Noita's world.

Notably, there are several Teleportatium filled eye-like structures embedded in the Holy Mountains, the Teleportatium in them allowing the portals into the Holy Mountains to function. It is unknown what level of expertise with magical liquids is needed to be able to create stable, lasting portals like this using Teleportatium, but due to their rarity(appearing only two other times in the game; once in a rare broken eye-like structure in the Snowy Depths and once in The Hourglass Chamber in the Hiisi Base), it can be inferred that they require an at least decent amount of skill to create.

The Meditation Cube is a rare structure which can occasionally spawn in the Coal Pits. Standing on the cube for a period of time will cause a portal to the Meditation Chamber to spawn.

The Meditation Chamber appears to be the interior of the Meditation Cube, based upon the glyphs that appear on both being identical (though reversed in the Meditation Chamber, to line up with it being on the interior). The cube and chamber notably greatly differ in their size relative to Minä; which along with them seemingly being the same structure, and the lack of destroyed terrain upon exiting the chamber largely ruling out the cube expanding when the portal is entered, implies that the character is somehow shrunk down when entering the portal into the cube, though how this is achieved is unknown.

Notably, an odd outline of a prism appears around the portal on the inside of the chamber. It is possible, though not confirmed, that this prism outline may somehow be connected to the shrinking effect, as it is seen nowhere else in the game. The player also gains the ability to tinker with wands while they are in the chamber for the first time, so the prism could also be linked to this. Alternatively, it could also be purely aesthetic.

Filling the eye with Teleportatium or Unstable Teleportatium will generate a portal to a closed off snowy cave, housing two wands and a portal to return to the Snowy Depths. It is unknown by who or for what purpose this specific eye was originally made, due to its differing portal destination from the Holy Mountain eyes.

The Robotic Egg is possibly the egg from which the god of Technology hatched. The egg is accessed by using a portal that is summoned via a spell which is dropped after three special Munkki enemy encounters in the Snowy Depths. The location at which the portal spell must be used is then found in the Underground Jungle, determined by the locations of four Munkki statues. The cryptic nature of the statues alongside the spell being possessed by special Munkki enemies may indicate that The Robotic Egg may be considered a location of pilgrimage by the Munkki.

The Hourglass Chamber is a structure hidden above a shop in the Hiisi base, which contains a large Hourglass with a small amount of blood at its bottom, and that has a statue of something behind it. It is unknown whether the chamber was built by the Hiisi or someone else, though the Hiisi's lack of expertise in magic may indicate that they were not the chamber's builders. The Hourglass Chamber has three different functions dependent upon what is done with the Hourglass; it either causes an earthquake, turns blood into gold, or opens a portal to an eye shaped room containing 8 spells. Notably, the eye room has an odd purple spiral originating from behind the portal. The Blood-to-Gold transformation may imply Alchemist involvement, though this is entirely speculative.

The Laboratory is the area in which Kolmisilmä is fought, the location at which the portal to The Work (End) opens upon Kolmisilmä's death, and is the resting place of the Sampo. Oddly, the area does not appear to resemble a typical laboratory, and the reason why it is named The Laboratory is unknown.

Minä (sometimes referred to as "the Noita") is the player character, and very little is known about their origin, affiliations, etc. Most of the game's creatures are hostile towards them on sight, though whether this is due to some sort of faction affiliation, a territorial reason, or another cause entirely is unknown.

Minä's robe bears a resemblance to those of the alchemist faction, being of similar shape and color. It is unknown if they have any sort of affiliation or connection to the alchemists.

Kolmisilmä's origin is unknown. It does seem to have some sort of connection with the gods, due to its unique interactions with the Moon and Dark Moon when it has been transformed using the Refreshing Gourd, and its guarding of the Sampo. This connection to the gods is further emphasized with the strong resemblance the altar of the Coral Chest has with Kolmisilmä.

Sauvojen Tuntija's origins are unknown. It is possible it may have some sort of connection to the Orbs of True Knowledge, as it is spawned when taking a specific orb, though nothing is confirmed.